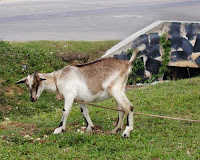 "He sat at the table, stood up, sat down again, stared gloomily at the wall for some minutes, lit his pipe, and then, laboriously, with a single first finger and his heart heavy with misgiving, he typed the first news story of his meteoric career. No one observing that sluggish and hesitant composition could have guessed that this was a moment of history--of legend, to be handed down among the great traditions of his trade, told and retold over the reeking bars of Fleet Street, quoted in books of reminiscence, held up as a model to aspiring pupils of Correspondence Schools of Profitable Writing, perennially fresh in the jaded memories of a hundred editors; the moment when Boot began to make good."

Have you guys ever seen the Naked Gun movies with Leslie Nielsen, where he plays the bumbling cop Frank Drebin? Drebin is the worst cop imaginable, but somehow he always seems to be in the right place at the right time, catches the bad guys almost by accident, and comes out looking like the hero at the end. The Naked Gun movies are exactly what Evelyn Waugh's Scoop reminded me of when I began reading it. Waugh's hilarious and goofy hero, William Boot, wants nothing more than to live quietly in the country with his extended eccentric family and servants at his home, Boot Magna, writing a small nature column nobody reads called Lush Places. When another writer named John Courtney Boot's name is dropped by a local politician for a foreign correspondent job at the Beast, the job is mistakenly given to William, who only takes the job because he figures it is his punishment for the mistakes he made in his last article. Hilarity ensues as the clueless, gullible Boot is sent off to war-torn Ishmaelia, a fictional country in Africa. Arriving in Ishmaelia with a herd of seasoned foreign journalists and a hysterical mound of luggage, he is the only one of the journalists to resist being sent out of the Ishmaeli city of Jacksonburg on a wild goose chase and is therefore in the right place at the right time to get the uncontested scoop on the Soviet military coup no one saw coming. Suddenly William Boot's name is on everyone's tongue...but the last thing William wants is to be famous.

I thoroughly expected to plow through another dry Waugh book like Brideshead Revisited (see my review here), but was completely and happily disappointed in this when I read Scoop. I loved it. As he did in Brideshead Revisited, Waugh peoples his story with unforgettably unique characters, like the gold-digging Katchen, the stuffy, self-important Lord Copper, the obnoxious Uncle Theodore, and the passive-aggressive editor Salter. The part where Salter goes to Boot Magna in an attempt to drag the reticent William back to London for his award banquet is about the funniest thing I have read in a long time. The book wraps up with a section dedicated to the future of all of the characters, which was also quite humorous.

After the dark comedy of Jean Brodie and the nonsensical ramblings of the Wake, this book was much appreciated, and much enjoyed.