Libris Interruptus...Requiem for a Feline Friend 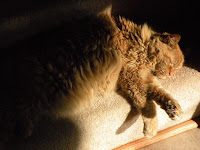 In September of 1995, I drove to the Chapel Hill Animal Shelter in search of a friend. Most of my college friends had already graduated, and I had half a semester to go. I went in that day, and knew at first sight the kitten that would be going home with me. He was a long-haired, orange cat with black freckles on his lips and paw pads. When I took him out of the cage, he crawled up onto my shoulders and laid down there, purring away. I named him Frank, after Franklin Street in Chapel Hill, and after Frank Sinatra, who had made a comeback with the whole 'swing dancing' thing that was at that time sweeping the nation.

Over the last fifteen years, Frank and I have traveled all over the country together. He's lived with me in five states: North Carolina, Maryland, Utah, California, and here in Minnesota. He was there when I had my daughter in 1998 as a scared single mother, and was there when I got both my bachelor's degree in 1995 and my master's degree in 2001. He was there when I got married in 2007 and in fact did his damndest to win over my non-cat-loving husband. He managed to tolerate his cat sister Fiona, even when she bit his ears and ate his food, and loved nothing more than laying in a warm, sunny spot and having his chin rubbed. No one could ask for a better friend than Frank was to me all those years.

Frank and I took our last trip together three days ago. I came home from dinner to see him dragging his rear left leg behind him and meowing piteously. He hadn't been eating hardly at all as of late, and was spending most of his time sleeping, as old cats do. I knew something was wrong. I took him to the emergency vet, and the unfortunate news came out that he had a blood clot that had paralyzed his back leg. The vet gave him very little time, if any, and told me that his quality of life would be beyond awful if I allowed him to live. The decision was made that my boy needed to be free of pain and be in a better place. I was there when it happened and it was very peaceful.

Those of you who bore with me when I bawled my way through The Call of the Wild (and Buck lived!!!) can imagine what condition I was in Thursday night. It was, to date, one of the hardest hours of my life. I feel sorry for Evelyn Waugh, because even if Brideshead Revisited is a fabulous book, it's not touching me at all. Every day gets a bit easier, but reminders abound everywhere. My orange boy will always be here with me and for me, in spirit.

Those of you who have pets, love your animal family members for all the time you have with them.
Posted by SocrMom78 at 10:57 AM