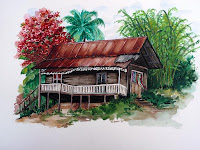 "Then one evening a great calm settled on him, and he made a decision. He had for too long regarded situations as temporary; henceforth he would look upon every stretch of time, however short, as precious. Time would never be dismissed again. No action would merely lead to another; every action was a part of his life which could not be recalled."

VS Naipaul's wonderful epic novel, A House for Mr Biswas, chronicles the life of Mohun Biswas and his quest to have a house of his own. Born inauspiciously to lower-class parents in Trinidad, Mr Biswas' life seems to be one catastrophe after another. Thinking Mr Biswas has drowned, his father searches a lake for his body, only to drown himself. When his family relocates, Mr Biswas is taken into training as a pundit, and when one day he steals a couple of bananas from the pundit, is forced to eat the rest of the bunch, which results in Mr Biswas' ongoing stomach problems throughout his life. His sign-painting business results tangentially in meeting his wife Shama, and her crazy family, the Tulsis. A love note sent to Shama is discovered by Mrs Tulsi, her mother, and he is then recruited by her family to marry her. Upon his marriage to Shama, Mr Biswas discovers that he is expected to assimilate, uncomplainingly, into her family. This includes living in a huge house teeming with children and all the other members of the Tulsi family, and submitting to their rules and expectations. Mr Biswas' independent streak collides with the communist society of the Tulsis, where no one is allowed to do anything differently or have anything better than anyone else. Children inevitably are born, and when Mr Biswas tries to build a house of his own, it is destroyed in a storm. His subsequent mini-nervous breakdown puts him on the road to Port of Spain to find a new job. He lands a job with the Sentinel, a newspaper there, and he moves his family there to get his children better schooling.

Things finally seem to get better for the unlucky Mr Biswas in Port of Spain. His newspaper job requires him to visit the poorest people there, to see who qualifies for a monetary prize as "deserving destitutes". His son Anand does well in school and gets private tutoring for his writing ability. When the Tulsi clan relocates to an estate in the middle of nowhere, the Biswases go with them, only to regret their decision and move back to Port of Spain. Unfortunately, the Tulsi widows send their children to the Port of Spain house too, to get better schooling, and the previous quiet and peace of the house is destroyed, as the house is overtaken by children. Anand wins a scholarship to college, and Mr Biswas is offered a job with the government, which allows him to begin saving money for his house. An opportunity drops into his lap at the end of the book, and Mr Biswas finally gets his house....but circumstances intervene to prevent him from enjoying it.

I loved every page of this book. Mr Biswas is an independent, comical character who refuses to submit to the expectations of the Tulsi clan. After all of the bad luck that comes to Mr Biswas, you want things to work out for him in the end. His ironical humor lights up the book and there were sections where I laughed out loud. His fears of having the Tulsi pundit, Hari, come to bless any special occasion in their family was hilarious, as were his descriptions of the 'readers and learners' in the Port of Spain house and the familial practices of the Tulsis. I respected him because unlike the rest of the Tulsi sons-in-law, he resists the inertia of mooching off the family and doing nothing. He goes out and finds a lucrative job, and despite the free room and board, works hard to save money to get his family a place of their own.

It was a bit startling to read about the social and economic differences between what we have here in the US and what Mr Biswas accepted as normal in Trinidad. Wives and children were beaten regularly, and these 'floggings' were actually sources of pride to them, and were treated humorously by Naipaul. By the middle of the book, I found them slightly amusing, since no one seemed to mind them and it happened so much. Mr Biswas was a bit different from the rest of the Tulsis, as he did not seem to beat either Shama or his kids with any regularity. The houses that they lived in sounded like little better than shacks or huts. Tree branches provided rafters, and corrugated iron provided roofs. I could completely understand why he wanted a good quality house, and I really appreciated mine after reading about how they lived.

This book is yet another reason I am glad I began reading the Modern Library's list. I would never have picked this book up had it not been on this list, and it makes me sad to think I might have missed it. I was very sorry it ended, as I wanted to know what happened to Mr Biswas' kids when they grew up. A big, chunky read at 564 pages, but one I enjoyed immensely.

This book is my third book for the Chunkster Challenge 2010.