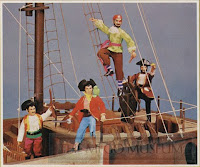 "Grownups embark on a life of deception with considerable misgiving, and generally fail. But not so children. A child can hide the most appalling secret without the least effort, and is practically secure against detection. Parents, finding that they see through their child in so many places the child does not know of, seldom realize that, if there is some point the child really gives his mind to hiding, their chances are nil."

There were several take-home messages Richard Hughes passes along to us in his 1929 novel, A High Wind in Jamaica. We'll kick off this review with them right now.

1)Children can be more devious than adults.
2)Not all pirates are bad guys (something Disney took to the bank with their Pirates of the Caribbean movies).
3)Parents and other adults are clueless about the true nature of children.

The five Bas-Thornton children (ranging from ages 3 to 12) aren't like normal kids. They live in the ruins of an old sugar plantation in Jamaica, and are basically running wild. They spend their time hunting, climbing trees, playing with sticks and old bottles for toys, and torturing animals, until one day a freak hurricane blows away their house. Their parents decide to send the kids back to England since Jamaica has proven unsafe, but en route, their ship is boarded by pirates. These pirates are not the sharpest knives in the drawer. They take all five children onto their own boat as a way of inducing the captain of their ship to produce money. The captain mistakenly sees the pirates throw things overboard, and assumes he has drowned the children, so they quickly leave the scene. The pirate captain is now stuck with the children, whom he never intended keeping.

The kids adjust quickly to life aboard the pirate ship, and Stockholm syndrome kicks in. The pirates are never overtly cruel to the children and pretty much allow them to do whatever they want, and a quasi-attachment is created between the kids and several members of the crew. When the kids are taken to an entertainment while on land, the oldest boy falls and breaks his neck...but astonishingly, the children don't seem to be very upset about this development and don't show much interest in his fate. The pirates board another ship, and take the captain hostage. The oldest girl, Emily, is stuck in the cabin with the bound captain, and when he makes a move to try to escape, she stabs him repeatedly, and he later dies of his injuries. Again, very little remorse is shown on Emily's part. In fact, another girl, Margaret, is blamed for the incident, but is thrown overboard. Luckily she is rescued.

The novelty of having kids swarming all over the pirate ship wears off, and the captain, Jonsen, finds another ship and makes up a story about rescuing the kids. The kids are taken onto the new ship, but Emily tells the people on the ship what really happened. The pirates are hunted down and charged with murder of the missing captain and the older Bas-Thornton boy; however, without actual bodies, the eyewitness accounts of the children will be necessary to convict them. The kids are reunited with their parents, who also left Jamaica, and a lawyer tries to get the true story of what happened with the dead captain out of Emily, who won't talk. The other kids hardly remember what happened. When Emily is put on the stand at the trial, she tells of seeing the dead captain, but not why he died. Everyone assumes since pirates are bad that the pirates killed him, and they are all hanged. Emily goes back to her regular life, seemingly unaffected by everything that has happened.

I have mixed feelings about the book. On the one hand, it was very interesting to read an adult's account of the thought processes of children. It was interesting to see what Hughes felt would hit the radar of a child. For example, at the beginning of the book, two incidents occur that Emily, the oldest girl, ruminates about for much of the book: an earthquake and the violent death of their pet cat during the hurricane. These seem to be logical, traumatizing events that might upset most kids. However, what was disturbing to me is what DOESN'T seem to upset them. The children don't seem to be very fazed by the terrible storm during the hurricane and the subsequent loss of their house and most of their belongings. They don't seem upset to be set adrift on a boat without their parents, aren't upset about being shot at and taken onto a pirate ship, and don't seem to miss their brother when he dies. Whether this is a commentary on the adaptability of children, or their inherent selfishness and lack of attention, I'm not sure. Maybe a little of both.

Something else I found interesting was the unreliability of children as witnesses during a trial. Hughes notes that "the children listened to all they were told, and according to their ages, believed it....Who were they, children, to know better what had happened to them than grownups?" Basically, the difficulty of getting children to tell the truth, when they are heavily influenced by grownups, makes them difficult witnesses. The lawyer has Emily memorize answers to questions he'll ask her, which she does with no trouble...but never does she seem to question their truth or validity. After the lawyer interviews all the children (which is basically a joke, as the kids can't stay on the subject and are making stuff up), the lawyer admits to their father that "I would rather have to extract information from the devil himself than from a child". Emily's testimony, while accurate, describes the death of the captain, but does not tell the whole truth. This is enough to convict the captain and crew.

Overall, it was not my favorite book, due to its dark, foreboding feel, but the ending was good and there was suspense and momentum to the plot.