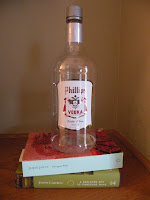 FW Fact: Scholars estimate Joyce worked between 60-70 different languages into the Wake. Just some of the languages used are Dutch, Norse, Lithuanian, Czech, Ukrainian, and Polynesian.

Fun FW Tip of the Day: Type the above FW quote into a Microsoft Word document and watch your Spellcheck freak out!!! :)
Posted by SocrMom78 at 5:31 AM