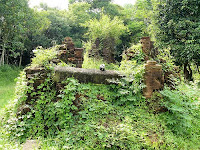 “People lived as they had always done; there was no break between past and present. All that had happened in the past was washed away; there was always only the present. It was as though, as a result of some disturbance in the heavens, the early morning light was always receding into the darkness and men lived in a perpetual dawn.”

A Bend in the River follows the story of Salim, who retreats from his ancestral home on the western coast of Africa and takes over a small trading goods store deep in the wilds of central Africa, at a bend in the river where civilization and the lack thereof intersect. Salim takes this job for several reasons: uprisings in his hometown, escaping from an unwanted engagement, and wanting to make something of himself. He is warned by the previous owner of the store, Nazruddin, to know ‘when to get out’. Salim arrives to see he will be living on the fringes of existence, in a town that has gone back to bush and rubble after colonial rule. He befriends other ‘foreigners’ who live in the town, and when a slave boy, Metty, is sent to him from his parents, he employs Metty in the shop.

Salim is also responsible for Ferdinand, a boy from the jungles who will be attending school in the town. Salim jealously watches while Ferdinand gets the schooling, education and opportunities that are closed to him. When the country is taken over by an anonymous President, new things begin to happen in the town. Modernization arrives in the form of the “Domain”, a series of modern buildings and a ‘polytechnic’, where Ferdinand gets to attend more school and Salim’s friend Indar, also from the upper-class coast, arrives as a speaker. Unlike Ferdinand, who blindly spouts the dogma he is taught at school, Indar has concerns about the direction of the country, as Salim has had all along. Through Indar, Salim meets Yvette, the young wife of Raymond, a man whom the President favors. Salim begins a passionate affair with Yvette, but when Raymond’s favor drops with the President, things go sour for Salim and Yvette. At the same time, things also start to go sour for the town. There are tribal uprisings and attacks against the President and his minions. Shop owners who have been there forever sell out and leave. Salim begins to feel the nervousness of being trapped, and decides to visit Nazruddin in London, where he becomes engaged to his daughter Kareisha. Upon returning to settle accounts in the town, he finds that the President has sold his shop to someone else, and he is under suspicion from the police. When he is imprisoned, Ferdinand, who has risen to the post of commissioner, bails him out of jail and puts him on the first steamer out of town before the arrival of the President, who is coming to execute everyone of prominence in the town.

One of the main themes of the book is a Latin saying inscribed on the town lycee building, Semper Aliquid Novi (‘always something new’). It is so appropriate to the seeming impermanence of settlements in Africa. The ruins of colonial buildings are still visible in the town, which begins to grow anew after independence and again under the Presidential rule, and Salim realizes that the current civilization he is living in could just as easily be reduced to rubble:

“The ruins, spread over so many acres, seemed to speak of a final catastrophe. But the civilization wasn’t dead. It was the civilization I existed in and in fact was still working towards. And that could make for an odd feeling: to be among the ruins was to have your time-sense unsettled. You felt like a ghost not from the past, but from the future. You felt that your life and ambition had already been lived out for you and you were looking at the relics of that life. You were in a place where the future had come and gone.”

Nothing seems to stay the same in Africa. Even the rise and fall of people in the President’s favor, such as Raymond’s rise and fall from grace, and the improbable rise of Ferdinand, an African raised in the jungle, show that importance as a human being can also be changed at a moment’s notice, and someone with the President’s ear one day can be ignored and forgotten the next.

Another element of the story I found fascinating was Naipaul’s treatment of African history. Salim says that, as Africans, “we never asked why; we never recorded”, since natives were unable to read and write. They relied on the oral tradition of passing stories down among family members. Salim, in talking about a story he heard from his grandfather, notes that “without my own memory of the old man’s story I suppose that would have been a piece of history lost forever.” Africa has to rely on educated Europeans, like Raymond, to record their history for posterity. However, absent from these dry European histories, which rely primarily on documentation, are the true experiences of the African natives and their traditions and beliefs. Salim becomes very angry reading over Raymond's journal articles, saying:
"[Raymond] gave no reasons and looked for none; he just quoted from the missionary reports. He didn't seem to have gone to any of the places he wrote about; he hadn't tried to talk to anybody....He knew so much, had researched so much. He must have spent weeks on each article. But he had less true knowledge of Africa, less feel for it, than Indar or Nazruddin or even Mahesh....Yet he had made Africa his subject."
A lot of noise has been made in other reviews about Naipaul’s treatment of women in this novel. Women seemed to fall into one of two categories: modern working woman, and object of obsession. Ferdinand’s mother, Zabeth, is a single mom who runs her own business in the bush, and Salim’s fiancée, Kareisha, is still single at 30 and becomes a pharmacist. Shoba, who is idolized by her husband Mahesh, and Yvette, who really seems to get around, aren’t portrayed as particularly ambitious women, who rely on the men around them to bring them their security. I did not enjoy the scene where Salim loses it and beats up Yvette, but I don’t think it says anything overarchingly negative about all women everywhere.

I have to say I thoroughly enjoyed V.S. Naipaul’s A Bend in the River. And my enjoyment was unexpected, and definitely wasn’t enjoyment in the traditional sense. The story was dark, foreboding, and at times apocalyptic in its story of the rise, fall and disappearance of civilizations and rule in the wilds of Africa. Not usually my thing at all, but I have to admit I was sucked into the story, and was actually begging Salim to do as Nazruddin told him and “get out” when things started to go badly in town. The ending was a bit ambiguous for my taste, but that's probably the way Naipaul wanted it to go down. This book should remind all of us how lucky we are as Americans to have stability, democracy and education in our country.
Grade: B+
Posted by SocrMom78 at 8:51 AM