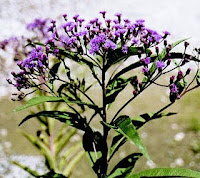 "Technically a weed is any plant that is unwanted or a nuisance", explains The Suburbian Agrarian on his website, http://suburbanagrarian.blogspot.com/2008/02/plant-of-week-tall-ironweed.html. Places like Home Depot and fertilizer companies make a killing (pun intended) on trying to help homeowners control weeds. Weeds like ironweed (called so because of its tough stem) generally have very brief, unremarkable lives, aren’t highly valued by people because of their less than aesthetic appearance, and as anyone knows that's ever tried to get rid of dandelions, weeds have a way of coming back, again and again and again.

I'm sure William Kennedy had the image of ironweed in mind when he wrote about Francis Phelan, the main character of his book, Ironweed. This book is the third of a series of seven books that Kennedy wrote about goings-on in his hometown of Albany NY. Francis is a homeless drifter/one-time baseball player/recovering alcoholic and his drifter friends as they try to make ends meet in the streets of Albany. In the present, Francis is trying to pull his life together; he's got a homeless semi-girlfriend Helen, also once-upon-a-time famous as a singer, and a drifter friend named Rudy. But Francis’ checkered past is just as present. Ghosts from Francis’ past, some of whom he killed, converse with Francis and even follow him around. He is haunted by his role in the death of his infant son, which drove him to abandon his family and turn his back on everything he knew.

I loved this book. It had such a fantastic message. Even though Francis had his fifteen minutes of fame and lost it, which would have embittered anyone, and even though he has committed cold-blooded murder several times, Francis is a resilient, compassionate character who survives (like the plant ironweed), commands your sympathy, and does not let his situation get him down. He survives hunger, cold, homelessness. He proves his humanity as he collapses at the grave of his baby son, and reaches out to those around him to help them, like taking care of Helen and giving his dinner to Sandra before she dies. Even the murders Francis committed are revealed as self-defense. When the chance comes for Francis to reunite with his family, forgive himself, and leave his past behind, you are truly rooting for him to return to them and forgive himself.

I am sure William Kennedy didn’t live on the streets like Francis Phelan did, but he sure writes like someone who knew what it was like to have nothing, and appreciate everything, like Francis did. Totally recommended.