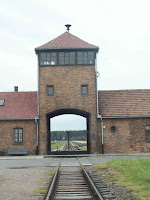 "Is it best to know about a child's death, even one so horrible, or to know that the child lives but that you will never, never see him again? I don't know either for sure. Suppose I had chosen Jan to go...to go to the left instead of Eva. Would that have changed anything?" She paused to look out through the night at the dark shores of the Virginia of our destination, removed by staggering dimensions of time and space from her own benighted, cursed and--to me even at that moment--all but incomprehensible history. "Nothing would have changed anything," she said."

For two weeks after the attacks on September 11, 2001, I was unable to sleep with the lights off. I lay curled in my bed every night, with the horrifying and grotesque images we were constantly being shown on TV scrolling through my head like the CNN crawl. I was firmly, irrationally convinced that the terrorists would show up any minute in my tiny little town of Chico, California, and take over. Watching the unimaginable happen that week--airplanes slamming into buildings, buildings I had visited as a child collapsing--anything seemed possible. The terrorists had not only invaded New York, they had invaded my head.

When people talk about the Holocaust, most people point to the horrifying number of people killed in the concentration camps over a 5-6 year period. What many people don't focus on is how many walked away from that. Barrington James estimates that 6.5 million Jews survived the Holocaust. Imagine what the survivors of the most atrocious violation of human rights ever in our history must have witnessed while in captivity...and then imagine not only trying to live with those images in your head night after night, but also trying to live with the guilt of being one of the 'lucky ones' when so many others died. It makes my television experience of 9/11 look painless by comparison.

William Styron’s fifth novel, Sophie’s Choice, published in 1979, is a very deep and intense story that takes readers into the heart of the Holocaust, told from the viewpoint of one who endured and escaped its persecutions, and her attempts to live with what she experienced. Stingo, the book's main character, is a dislocated Southerner and embittered wanna-be author, who befriends Sophie, a Polish emigrant, and her paranoid schizophrenic Jewish boyfriend Nathan, in a Brooklyn boardinghouse. Sophie and Nathan’s relationship is tormented and passionate, and it is in between their arguments that Sophie opens up to Stingo about her experiences of the Holocaust from her life in Poland, leading up to the terrible choice she is forced to make on the platform at Auschwitz. The struggle of Sophie and Nathan to deal with their pasts and their own personal demons is heart-rending and uncomfortably fascinating. Kind of like a car crash; you don’t want to see it, but you can’t look away.

It is Styron’s treatment of memory and how the characters chose to remember events that happened in their lives that touched me the most during the course of the novel. When Sophie would tell a story to Stingo, she would begin with the glossed-over, more palatable version, but then later would tell the true, much more painful version. The lies the characters were telling to themselves to escape the guilt and sadness they had experienced, while understandable, were heartbreaking. I was not sure at times that Sophie was lucky to have escaped with her life. Is it harder to live with the memories of something awful, or to be dead? That is the question Styron asks.

In the end, Styron shows us that the dead of the concentration camps were not the only victims of the Holocaust. Those who lived through its horrors like Sophie, and those who stood passively by, like Nathan, were just as deeply affected. The true horror of the Holocaust is and always will be that it was allowed to happen at all. Thanks to the experiences and images of the Holocaust, horrible events in our modern times like the genocide in Bosnia and 9/11 no longer go unchecked and ignored. Sophie’s Choice is a fantastically deep and moving novel I hope you will enjoy as much as I did.