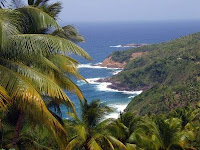 "Coming from the Antilles’, he declared, ‘with a terrifying insight and … passion for stating the case of the underdog, she has let her pen loose on the Left Banks of the Old World”. Ford Madox Ford, describing the writing of Jean Rhys.

Jean Rhys certainly knew her subject when she wrote about Bertha Mason, the tormented ‘madwoman in the attic’ of Bronte’s Jane Eyre in her novel, Wide Sargasso Sea. Born on the island of Dominica, daughter of an English doctor and a Dominican mother, Rhys was also a child of mixed blood who was treated as an outsider in England, where she went to live with her aunt, because of her accent and mannerisms. Bertha Mason, introduced to us as Antoinette, is also a child of mixed blood who is treated as an outsider on the island of Jamaica, where she lives. Mixed blood is considered to be of lower status than black or white in the island’s society. Her mother Annette marries a wealthy Englishman but goes crazy when her house is burned to the ground and one of her children dies. After Annette’s death, Mr Mason takes care of Antoinette, sending her to school and to live with her Aunt Cora. Antoinette’s marriage is arranged to a man who is never named, but is assumed to be Mr Rochester of Jane Eyre. Her checkered past follows her to the island of Dominica, where a distant relative begins to fill Mr Rochester’s head with poisonous thoughts about his new wife and her family, intimating Antoinette could go the same way as her mother. Because Mr Rochester cannot be persuaded to think otherwise, the self-fulfilling prophecy becomes true.

Like any underdog story, the story of Antoinette’s turbulent childhood and the self-fulfilling prophecy of her madness is compelling and tragic. Rhys portrays the racial discrimination and isolation Antoinette experiences with great poignancy, having endured it herself to some degree in her own childhood. The stubborn blindness of Mr Rochester, who married for money and not love and who crushes his wife’s spirit by changing her name into something as ugly as Bertha, is infuriating. You will want to crawl into the pages of this book and beat him.

I haven't read Jane Eyre (believe it or not) and so I came to the end of this book wondering if I missed some subtle nuances in this story because of that; but as a stand-alone story I thought it was very well-written. You would have to have a heart of stone not to root for and sympathize with Annette’s plight.