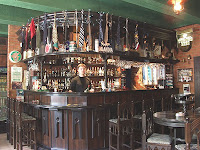 "When things are bad you keep telling yourself they can't get worse. Then they get worse. And stay that way until you're so weary and screwed you can't even worry anymore. It gets like that. So damn bad that you have to cheer up or die."

Picture for a moment the most decrepit, angry, shiftless, lascivious, drunken guy out there. Turns out you’ll have barely scratched the surface of Sebastian Dangerfield, JP Donleavy’s protagonist (if that’s even the correct word) in his 1955 first novel, The Ginger Man.

In 1950’s-1960’s Britain, an artistic movement arose, called Kitchen Sink Realism, which, according to Wikipedia, “often depicted the domestic situations of working class Britons living in rented accommodation and spending their off-hours in grimy pubs to explore social issues and political controversies"... “with stress on the banality of life”. There is hardly a better description of the basic plot of The Ginger Man to be found anywhere. Sebastian is supposed to be attending the university and raising a family, but unfortunately he seems to be doing anything but that. The story follows Sebastian’s never-ending trail of self-destruction through the pubs, slums, and beds of Dublin and London. Throw in some wife-battering, debt evasion, and petty theft, and you've got all the elements for a tale that Dorothy Parker of Esquire Magazine called, right on the cover of my book, "Lusty, violent, wildly funny." Drunk people are funny sometimes, right? (Right?). Honestly, I think there was only one part of the book that made me laugh, but it definitely wasn't what I would call 'wildly funny'. Slightly humorous, perhaps. Maybe Parker should have stuck with lusty and violent. Then I would have been more prepared for what was coming.

Reading the above, one would think that Sebastian Dangerfield has no chance of evoking any emotions other than disgust and loathing. However, they would be wrong. He also evokes exasperation and scorn. There was not a hole black enough and deep enough anywhere to throw him into, which was my only regret at the end of the novel, and I ran out of hope that he would help himself out and grow up by about page six. If JP Donleavy’s purpose in writing The Ginger Man was to show the seedy side of life and evoke strong emotions, he definitely succeeds there.