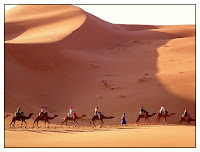 “And it occurred to him that a walk through the countryside was a sort of epitome of the passage through life itself. One never took the time to savor the details; one said: another day, but always with the hidden knowledge that each day was unique and final, that there never would be a return, another time.”

The Sheltering Sky was Paul Bowles’ first novel, and his most famous. Seeing as Bowles spent the majority of his life as an American expatriate living in Tangiers, Morocco, there’s no one better equipped to write about the experiences of clueless American tourists in the wilds of Northern Africa. And that is the basic premise of Sky: an American couple, Port and Kit Moresby, and their friend Tunner have decided to do some traveling in and around this area of Africa, despite travel warnings in this area which Port knows about but neglects to mention to his wife or friend. Port is already unfaithful to his wife within the first six chapters, and Kit’s pretended or real nonchalance sets up the dynamic that is to continue between the couple. As the group travels deeper into Africa, they get further from civilization as they know it, and that’s when things get interesting. The experience of what was to be a fun foreign sojourn changes three lives forever.

When Sky was first shown to Doubleday Publishing in 1949, it was rejected because it was not felt that the book was really a novel. It’s not hard to see why Doubleday might have felt this way. It reads somewhat like a travelogue of Northern Africa, and may have been thought to be more autobiographical than fictional. The descriptive language Bowles uses is pure and beautiful. Bowles obviously gives his setting great importance and wants the reader to see where they are. You can feel the flies as Port drives the jeep through the swarm. You can smell the garbage laying around the hotel in Ain Krorfa. Having never been to Africa, I needed Bowles' help to imagine what it would be like, and he definitely came through for me.

Against this rich backdrop are the morally questionable characters of Port, Kit and Tunner. Interestingly, Bowles keeps them at an emotional distance from the reader by pointing out their myriad faults early and often, emphasizing lies, infidelity and insecurity. I never felt truly sympathetic to anyone except maybe Tunner, who is the quintessential third wheel and keeps getting the shaft. What made this book fascinating for me was how each character reacts to the diminishment of civilization in their environment. Tunner freaks out about weevils in their soup, yet Port and Kit unhesitatingly finish their entire bowls of soup despite this. Kit’s desperation and helplessness in the middle of nowhere, far from medical care when Port becomes sick, is palpable. How well would any of us hold up in this same situation? How much does it take for someone to be pushed across the line between sanity and insanity?

The last third of the book was, for me, where the momentum really picked up. Finally, I cared about one of the characters, yet still in a limited way. I wanted to know what would happen to Kit and if she would make it out of the wild. Not all of the book was coherent or readable (the section describing Port’s typhoid delirium is a good example), but the overall message of living every day in the present because there may not be a tomorrow is profound and sobering. It didn’t make me want to go on a trip to Tangiers any time soon, but thanks to Paul Bowles' beautifully descriptive prose, I was able to visit it in my imagination just as if I had been there.